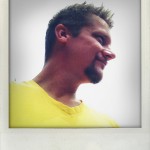 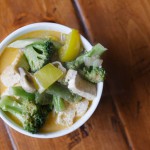 Meet MVP David Burke, a gluten-free vegan living in Pittsburgh, PA. Dave is passionate about telling people’s stories through photography—he specializes in weddings. Click here to learn more about Dave’s photography business and check out some of his incredible photos. We met at Panera Bread and we both tried the frozen lemonade— which I highly recommend if you haven’t tried it yet! 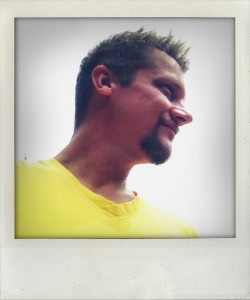 Photo of David Burke, courtesy of Dave himself

Dave said he went plant-based for health reasons—he felt fatigued most of the time, had digestive and skin issues (rashes and dry skin patches), felt depressed, had issues with anxiety, and had trouble sleeping. But now, Dave is healthy and feels better than ever! “It’s amazing how simple it is that what you eat really matters,” he said. “My patience is greater and my fuse is less short. I’m clear-headed.”

Since going vegan, Dave has lost 38 lbs. Impressive, huh? “I tell people that I stopped carrying around my 5 year old daughter. She weighs 40 lbs,” Dave said with a laugh. “I feel good. I haven’t weighed this little since 1994.” The single father of 5 said his children are who inspires him to stay healthy. “I just want to be the best dad I can be,” Dave said. “If I’m no good, what good am I?”

Dave Burke’s journey is interesting because he’s tried so many different diets to try to improve his health. “I just wanted to lose some weight and feel better,” he said. “I tried Weight Watchers, Atkins, and nothing worked.” He commented that he’d lose a few lbs only to gain it back. After trying diet after diet to try to lose weight and feel better, Dave tried out the paleo diet. “It’s basically meat, meat, meat, some vegetables, no grains whatsoever, and very little sugary fruits.”

“This past January I went to the doctor. I had gotten rid of gluten again but I told him, ‘I’m eating pretty clean but I’m still feeling sick,’” Dave said his doctor asked if he was eating animal products and when Dave said yes, his doc suggested that he go vegan. “I’ve been interested in nutrition for about 2 years. I was thinking, ‘Wow, he’s actually talking about nutrition!’” Dave said. “Before, it was more like, ‘your cholesterol and triglycerides are high—let’s try this pill.’”

Although his plant-based lifestyle has greatly benefited him, at first Dave thought he would be stuck eating celery and carrots. “Vegan, gluten-free. What can I eat?” Dave said he was thinking at the time.  After the initial shock wore off, Dave found a website (that he still loves!) called The Vegan Stoner. “I liked it because it had real simple, cartoonish drawings of recipe ingredients and really simple instructions to make vegan meals,” Dave said. He said The Vegan Stoner helped inspire him to make his own meals. Another resource Dave found useful was the Vegetarian Starter Kit, recommended to him by his doctor.

Although he feels great now, Dave said he felt terrible the first week of being vegan. “I don’t know if I was in withdrawal or what,” the father of 5 said. “But after that first week, I started to feel really good.” After his third week, he said he knew there was no going back.

Since transitioning to his plant-based lifestyle, Dave said his cholesterol dropped 100 points, his triglycerides and blood sugar levels have gone down to normal, and all of his digestive, skin and fatigue issues went away. “All my numbers are fantastic,” he said. “I couldn’t believe it.” Dave said the key to sticking with vegan is to look at it as a lifestyle instead of a diet. Dave said that telling people he eats plant-based, rather than calling it vegan, sparks their interest and gets a conversation going.

“Aren’t you hungry all the time?” is a question Dave often hears. Although at first he thought he would be hungry with the lack of animal protein, the meals he makes are able to sustain him throughout the day. 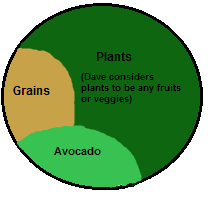 A key part in keeping his belly full is Dave’s motto ‘small plates, big tastes.’ The photographer said, “I use small plates. I fill that small plate and I’m satisfied.” He tries to make the majority of his plates full of plant-based foods (any fruit or vegetables; not including beans.)

So what does Dave eat to stay healthy and feeling energized throughout the day? “I make a lot of juice: kale, cucumber, lemon, green apples, ginger,” Dave said. “You feel like you did a shot of espresso when you drink it, but it’s good stuff.” Dave said that Udi’s gluten-free bread is a must-have, along with San-J’s gluten-free Tamari soy sauce and Larabars, his favorite treat for on-the-go. “Avocado, coconut oil, coconut flakes, nuts: that’s where I get most of my healthy fats,” he said. “One of my favorite breakfasts is a piece of toasted gluten-free bread smeared with avocado and sea salt.” The cooking fanatic shops at Costco, Trader Joe’s, and Fresh Market to find healthy vegan and gluten-free food options. He said his grocery bill is less expensive now that he doesn’t buy animal products.

David said he loves the adventure of the kitchen. “What I like to do is try the recipe as written and then the next time I do it, I make it my own. That’s that fun part,” he said. He said he doesn’t enjoy eating out as much because the taste doesn’t compare to his home-cooked meals. “Anything that comes quick and easy isn’t good for you,” Dave said. Luckily, the photographer has a tip for those that struggle with food preparation: take an hour a week and do some prep time with all the vegetables you’re going to use for the week—store them in plastic bags in the fridge for cooking convenience throughout the week.

As far as manufactured foods go, Dave said he tries to eat as close to real food as possible, which he considers as food with ingredients he can pronounce. “I’m feeling good about the path I’m taking with my habits and lifestyle changes. There’s always more to learn,” Dave said. Some more of Dave’s favorite foods include Pad Thai, black bean or edamame burgers, any soups (cauliflower rice soup and sweet potato soup to name a couple,) and vegan pizza with any topping you could imagine: artichokes, black olives, onions, and red peppers, with spinach and tomato sauce as a base.

So what’s Dave’s biggest challenge? “Not being complacent. I continually want to try new things,” he said. The photographer said he doesn’t want to be stuck cooking the same meals day after day and wants to continue to see the kitchen as an adventure. Dave’s journey has been long, but now he’s finally on the path to health and wellness. His story is without a doubt inspiring!

Dave was kind enough to share a favorite recipe of his – we call it MVP David Burke’s Curry. Here’s a spoiler pic– looks yummy! Find out how he makes his recipe here. 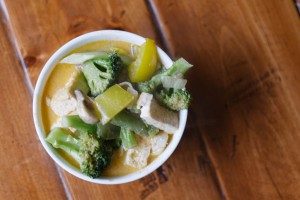