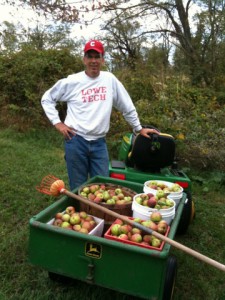 I grew up a Midwestern boy, the first of five children.  Our family lived in various small towns in Iowa, Illinois, and Minnesota during my formative years.  My parents both came from Iowa farm families, and that ethos was instilled in me from an early age.  We always had a garden filled with vegetables, and we canned much of the harvest every year – especially green beans.   Still today, I tease my mother that we had green beans with every meal: green beans with spaghetti, green beans with pizza, etc.

I left home for college at Iowa State and, then, for grad school at Carnegie Mellon University (CMU).  At CMU, I met and began drooling over the smart, lovely, and sweet Caroline.  We graduated, got married, and now live on a small farm of our own.  We share the farm with our two dogs, Daisy and Scout, and with Caroline’s dad who recently moved in with us.

The road to Garden Dish has been winding, to say the least.  I never met a vegetarian – much less a vegan – before grad school.  And when I did, I derisively questioned their sanity and/or manhood.  “What kind of a wimpy crazy person would not eat meat?  How could anyone even consider depriving themselves of steak, pork chops, or barbequed chicken – and a big glass of whole milk to wash it all down?”

But events happen, opinions change, and priorities shift.  When Caroline’s father began having heart problems, she began reading about diet and exercise and encouraging me to do the same – starting with works by Dr. Dean Ornish and Dr. John McDougall.  And when her dad’s heart problems culminated in bypass surgery, Caroline immediately put him on the Dr. Dean Ornish program. She and I followed suit, in a sort of sympathy, “we’re-all-in-this-together” diet.  I was verrrry reluctant.  We did go vegetarian – though we didn’t have enough motivation to stick with it for long.  Some other brief forays into a vegetarian/vegan lifestyle followed, without persistence.  But when Caroline’s doctor wanted to prescribe a cholesterol med for her, we took the vegan plunge and really committed to it.  That was at the start of 2003.

2009 – Present: Active member of Toastmasters International, including serving as Club President, VP of Education, and VP of Membership for The Pittsburgh Club #144.