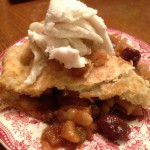 Winter Mince Pie is our vegan version of an old-fashioned Mincemeat Pie.  Do you love those piquant flavors of mince pie – the cinnamon, cloves, nutmeg, and ginger?  They’re all here, baked into a medley of fresh and dried fruit.  We chose fresh baking apples (such as Golden Delicious or Granny Smith), fresh pears, and a combination of dried cherries, dark raisins, and golden raisins. We think quince would be a nice addition too, if you have it.  We’ve left out the meat and suet of traditional mincemeat recipes of course, making this a definite step up from traditional recipes. 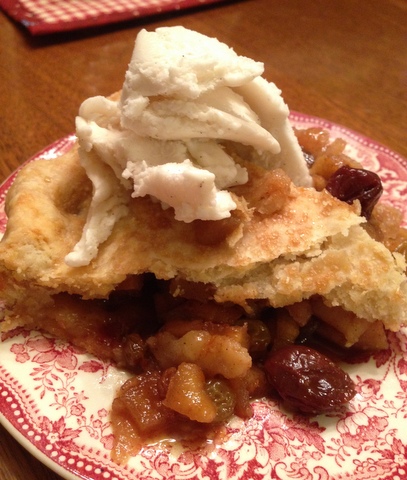 By the way, not all dried fruits are created equal.  Check the packages, some include oil.  It’s not needed.  We’ve had success with the Sun-Maid brand.  Their Natural California Raisins

, and their Dried Tart Cherries

are oil-free.  It may seem funny, us telling you to watch the oil, when there’s fat in the crust.  But you’ll be eating the rest of the dried fruits in the package long after the pie is gone, so let’s try to make a habit of buying dried fruit without oil.

Pictured here is a slice of warm, Winter Mince Pie topped with a scoop of vegan, vanilla ice cream from So Delicious.