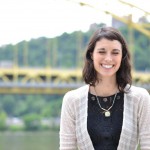 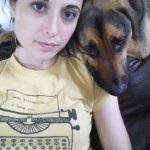 I’m happy to introduce you to MVP Ashley Frohnert! Ashley’s a Pittsburgh vegan and a local celebrity– she’s the 2014 winner of PETA’s Sexiest Vegan Next Door contest. Ashley’s excitement was obvious as she told Caroline and I about winning PETA’s contest, her love for animals, the health benefits she’s noticed since going vegan, and the many things she finds inspiring. This all took place in Crazy Mocha, a local coffee shop that was recommended by Ashley. Crazy Mocha is an original Pittsburgh company that has expanded to 30 locations– click here to find a location near you.

“When I think about encouraging people to be vegan or plant-based, it’s all about education,” Ashley said. “Once you find out what it’s doing to your health, the environment and the animals, there really is no other choice.” Ashley shared with us several books that educated her on factory farming and the animal industry. Out of everything she’s read about and watched in documentaries, Ashley said the cruelty that male baby chicks experience was the number one thing that made her go vegan.

Here’s some of the books and documentaries that helped encourage Ashley to make a change:

Ashley said she first started out as a pescetarian (meaning she ate seafood), but eventually ditched the seafood and became vegetarian around 2012. The dog lover said she lived off of macaroni and cheese during her vegetarian days. Ashley was passionate about adopting a vegan lifestyle. Unfortunately, she said she wasn’t able to transition overnight like she did when she became a vegetarian. “It took me awhile to actually phase stuff out,” she said about transitioning to vegan. Slowly but surely Ashley was transitioning to vegan and in February 2013, she said she began phasing milk and eggs out of her diet. September 1st is Ashley’s veganniversary!

Like our other MVPs, Ashley said she’s noticed the many health benefits of a plant-based lifestyle. An old knee injury that used to cause Ashley frequent pain has gone away, she said. “I actually have arthritis in my pinkie from breaking it so many times,” Ashley said, explaining that playing sports had a large part in her pinkie injuries. “It used to be a problem but now it’s not.” Ashley said she used to have trouble walking down the stairs when it was cold out, even when she was a vegetarian, because of her arthritis and knee pain. Now the Sexiest Vegan Next Door said she only feels pain every six months or so. Sounds pretty good to me! Ashley also said she doesn’t get sick often and feels more awake throughout the day. “I used to be very tired and a frequent napper,” she told us with a laugh. 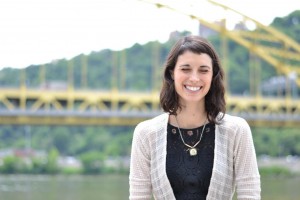 “You don’t have to be someone special or someone famous to be vegan,” -Ashley Frohnert

I was excited to ask Ashley about winning PETA’s Sexiest Vegan Next Door contest. “I was shocked when I was told I was a finalist,” Ashley said. “They really liked my personality and the fact that I was from a smaller city.” Ryan, a fitness fanatic from Charlestown, Rhode Island, was the other winner of the contest. Ashley said the whole point of entering PETA’s contest was to raise awareness about the animal industry. “PETA was really trying to get people to go to their website and I think it worked. You never know what someone will see and what they’ll think,” Ashley said.

Ashley said she likes to make recipes, but admits that cooking from scratch takes longer than going out to eat. However, when she does cook, Ashley said she rarely makes the same recipe twice. “I like to keep trying new things,” Ashley said.

So where does the busy vegan like to go to grab a bite to eat? “Eden is my favorite restaurant,” Ashley said, commenting that she would’ve become vegan sooner if she’d known about Eden, which has a seasonal menu. Ashley said her favorite junk food is the Seitan Pittsburgh “Steak” from Spak Brothers. “My favorite meal, at least right now, is the red curry from Thai Cuisine,” she said. Ashley said MadMex is another go-to spot for her. By the end of our conversation, Caroline and I were practically drooling and ready to hit some restaurants for taste testing!

Ashley is trying to get the Meatless Monday program implemented in Pittsburgh Public Schools, but unfortunately hasn’t had much luck yet. However, she’s determined to have her voice heard. “The hardest part is what other people say and think,” Ashley said. Ashley said that she often butts heads with her father because of her vegan lifestyle. “We have a family property and his grandpap lived there. They had pet chickens. They didn’t kill the chickens, but they did eat the eggs so he thinks that’s what its like,” Ashley said, explaining that her father doesn’t understand the horrors of factory farming. “He just doesn’t believe it.”

Fortunately, there are several women that keep Ashley inspired. “It’s fun to have a local Pittsburgher as inspiration,” Ashley said about Leah Lizarondo, the genius behind the Brazen Kitchen blog. She also looks up to Rory Freedman, as she’s read several of her eye-opening books. Any True Blood fans out there? Ashley loves actress Kristen Bower Van Straten, AKA Pam De Beaufort, for her vegan and animal rights activism.

Ashley said it’s helpful to have a good community to support you. “Kate Porigrow found me on Twitter two weeks after I became vegan. She told me to join the Vegan Pittsburgh group and at that point I wasn’t sure if I could still be vegan,” Ashley said, noting that at the time she didn’t know if a vegan lifestyle was right for her. “The second I found the group, I said, ‘Oh this is so easy, I could definitely do it!’ There were so many members and if they could do it, so could I.” Click here to check out the Vegan Pittsburgh Facebook group, or visit veganpittsburgh.org.

VegNews was another staple resource Ashley utilized during her transition to vegan. “VegNews has a really good macaroni and cheese recipe,” our MVP said. “When I first became vegan I made that a lot.” Ashley also loves the food blogs Vegan Richa, Minimalist Baker, and Oh She Glows and will look at them for new recipes or inspiration to create a recipe of her own.

When Ashley cooks, she said she occasionally uses oil although she doesn’t use huge amounts. She said she doesn’t eat too much processed food anymore, even though she did eat a lot of the meat and dairy substitutes when she first transitioned to a meatless diet. “I only occasionally eat sweets, but I don’t know if the reason for that is because every sweet I see isn’t vegan,” Ashley said. She said that when she does find a vegan sweet, it’s actually a sweet treat now.

Ashley is taking her love of animals to a whole new level of commitment.  She’ll be working with PETA in Los Angeles.  We’ll miss our hometown vegan, but we know she’ll do great things for animals in this next stage of her life.  Good luck Ashley!