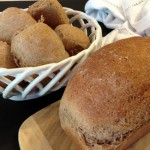 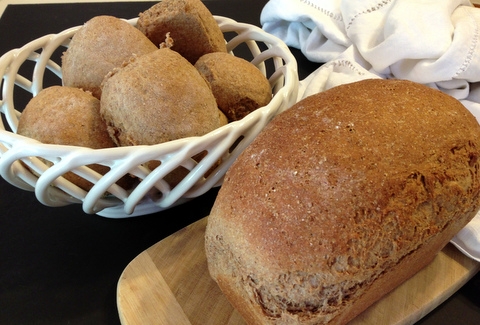 Don’t you just love the smell of homemade bread baking in the oven? Can you imagine it now? A beautiful golden loaf of soft, yeasty goodness being pulled from the oven, and placed carefully on the kitchen counter to cool, while eager family members “ooh” and “ahh” at the spectacle, asking “can we have some now?” There’s nothing like it. My family and I hover around a loaf hot from the oven, waiting for the second, the moment, when it’s cool enough to handle, but still warmly giving off that heavenly aroma.

If you’ve been baking bread for a while, maybe your evolution has been like mine. I started out as a white flour baker. For years that was all I made – variations on a white bread theme: cinnamon rolls, sweet potato bread (for which I won a Judge’s Choice Grand Prize at our county fair one year, just sayin’), New Year’s pretzel bread, hot cross buns, and more. There were lots of different add-ins, but always the white flour base. Once I began learning about healthier eating, I started adding whole grain flour into the mix. But it was only in the last decade that I finally made the conversion to 100% whole grain bread. No white flour at all. Judging by my family’s reaction each time the bread comes out of the oven, I’d say we’ve made the conversion quite nicely. With so much bread baking in our house, and my recent chance discovery of sprouted whole heat flour, I figured it was time for a taste test of a few flour brands. In the competition were three brands, two that I’ve used before with success and one (the sprouted flour) that was a new purchase from an online store:

The night before our taste testing, I made three loaves, each using one of the above products, and all using the same recipe for 100% Whole Wheat Bread. As per our usual testing method, our tasters were not aware of the brands.  After the much-anticipated votes were tallied, it was clear that:

I now keep both regular and sprouted whole wheat flour on hand for bread baking. I don’t think you can go wrong with any of the brands we tested, but isn’t it fun to know there’s a difference?  As usual, I’m posting the results as a reminder to the taste-testers. I hope these results are useful to you, but in the end it’s all about what you like.